“It isn’t anything, only they all felt kindly and wanted to show it. Tell the girl to put it away for your tea. It’s so simple you can eat it, and being soft, it will slip down without hurting your sore throat.” (Alcott 49)

“That looks too pretty to eat,” he said, smiling with pleasure, as Jo uncovered the dish, and showed the blancmange, surrounded by a garland of green leaves, and the scarlet flowers of Amy’s pet geranium.

We are just barely getting this posted in the month of March. If you get why that is significant, you are a giant nerd, and LET’S BE FRIENDS.

Confession from Miko: I am a Little Women FANATIC. [Jenne: Me too!!  I read my copy to pieces.]

It only took 6 attempts to get it right.

According to Abigail Alcott (the author’s mom!), blancmange should be made so:

Take two tablespoonfuls of arrowroot to one quart of milk and a pinch of salt. Scald the milk, sweeten it and then stir in the arrowroot, which must first be wet with some milk. Let it boil once. Orange water, rose water, or lemon peel can be used to flavor it. Pour it into molds to cool.

Sounds easy enough… Or not.
Did it measure up?

We totally expected this to be super-simple, but… This recipe has got to have the measurements wrong. Or maybe modern arrowroot powder that’s sold in stores today is drastically different than the stuff Abba Alcott had on hand. Because, well…

The flavor of it is actually pretty tasty. Like arroz con leche without the rice. But even after an entire night in the fridge, it did not set. Appropriately, this fail reminded me of the part in Little Women where Meg throws a hissy-fit because her jelly won’t jell.

Onto attempt #2.
Jenne has family visiting, so I am on my own in further blancmange experimentation. Which bodes well, considering that I am certainly NOT the cook of the two of us.

It didn’t set in the mold either, just poured right out like alien goo from a sci-fi movie. Weird, slimy texture. Rather like eating a plate of Gak. Remember Gak? Anyway, hggblech! But I will keep experimenting with ingredients. Should I succeed with a future attempt, I did buy a scarlet geranium and some green ficus to have at the ready for garnishing.

Results: Too soft to unmold, but getting there!

Results: Sigh. It had good texture and unmolded beautifully, but the white part of the lemon peel I had added made it bitter. It was like something Amy would make — an aesthetically pleasing dish that doesn’t taste very good. (Scroll to the top of the post for the photo.) But next time! I can feel it!

Attempt 6:
AT LAST!! A recipe that made the blancmange of my imaginings!

1. Soften gelatin in a bowl of water.

3. Put lemon zest in the milk and scald over medium high heat, stirring with a wooden spatula.

4. Add salt and sugar, and stir until dissolved. Take it off the heat. Wait till the mixture has stopped steaming quite so much — a few minutes.

5. Pull gelatin out of the water and wring lightly. Put in the double boiler. It should melt right away. Pour it into the milk and stir.

6. Take the lemon zest out by pouring the mixture through a strainer lined with paper towel.

7. Pour it into a small metal mold.

8. Cover with a small plate and let it sit in the fridge for a few hours.

9. Once it’s ready, let it sit in a pot of hot water for just a few seconds and flip onto a plate.

10. Decorate with flowers and leaves as directed by the text.

Jenne and I were also curious to try a more modern version of blancmange. I had grown up paging through a dessert cookbook of my mom’s, and there was a recipe for blancmange in it that sounded pretty tasty. We gave it a shot:

Directions:
1. Boil water in a medium saucepan. Throw in almonds for 30+ seconds. Strain, and then put the almonds in cold water. Once they’ve cooled a bit, strain the water and peel the almonds. It’s surprisingly easy! Just a teensy bit harder than popping edamame out!

2. Put the sheet gelatin in some cool water to soften it.

3. Stick the molds and beaters in the fridge/freezer to chill.

4. Put peeled almonds, water, and milk in the blender. Liquify!

5. Put in a saucepan and heat, stirring with a wood spatula. Add sugar and mix. Once it boils, take off heat and put a lid on it and steam for 15 minutes.

6. Put the mixture in cloth and squeeze out. Don’t burn yourself. 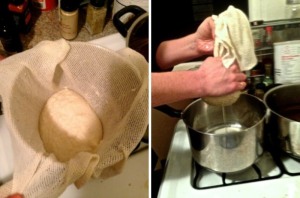 7. Heat gelatin in a double boiler and add to the mixture. Add vanilla (or almond extract). Mix as it cools.

8. Whip cream in a bowl till it forms soft peaks.

9. Add the sweetened almond milk mixture to the whipped cream slowly while mixing. 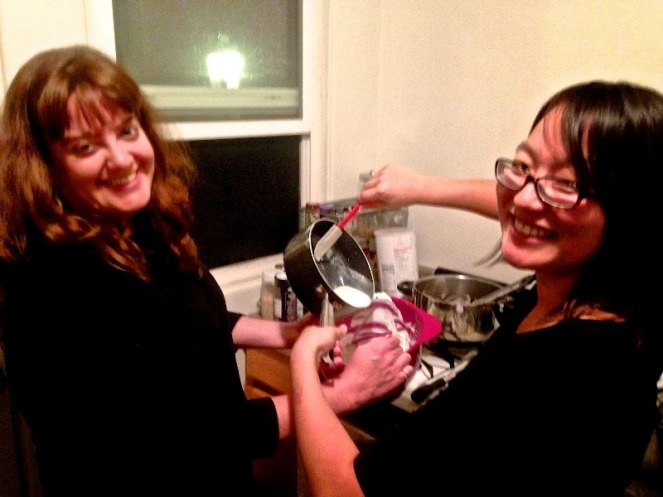 10. Pour into a mold, cover with plastic wrap, and chill. 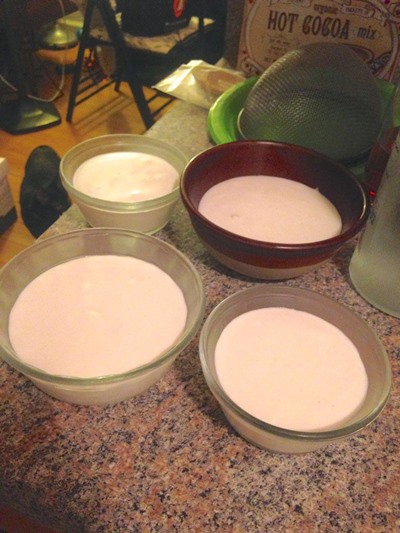 11. To get it out of the mold, put it briefly in hot water and flip onto a plate.

Did it measure up?
The almond doesn’t come through, as Mary Berry would say — we would just skip the almonds altogether, since that was a pain without much payoff.

Miko: We added vanilla instead of the almond extract that the recipe called for, since I’m not super-fond of the latter. But now that we’ve made it, I do think it would be better with almond extract. I’m also not crazy about eating whipped cream on its own, but people who are would probably find it pretty yummy. This dish is basically fluffy whipped cream. I feel like I can’t grade its deliciousness, since it’s just not something I’d like, even if it turned out beautifully. Jenne?

Jenne: I liked the modern version a lot, because whipped cream is probably my favorite thing in the whole world. I would also like to try it with almond extract. On the other hand, I don’t think I’d bother making it again–the texture is a little weird and I’d really just as soon have plain whipped cream instead of strangely bouncy whipped cream. I did serve it to friends with some fresh berries on the side and it went over pretty well.

It doesn’t seem like something I’d want to eat when I was sick–too rich! The Alcott recipe seemed like it would be better for that, if we could get the texture right. I would try using gelatin, or agar-agar if it needed to be vegetarian. I haven’t cooked with arrowroot before but it acts a lot like cornstarch, so I don’t think you’d ever get a nice texture–it would just get gloppier and gloppier and never really hold a shape.

Speaking of which, did you know that in England blancmange is sometimes called “shape”? Cam (pictured above) said her mother used to make it when she was a child, and it was also terrible, “with a leathery membrane on top”.