A 36 Eggs field trip! Jenne and I visited Shakespeare’s Corner Shoppe, a British goods market in San Diego. It’s a tiny store, but packed with all kinds of curious food and drink. 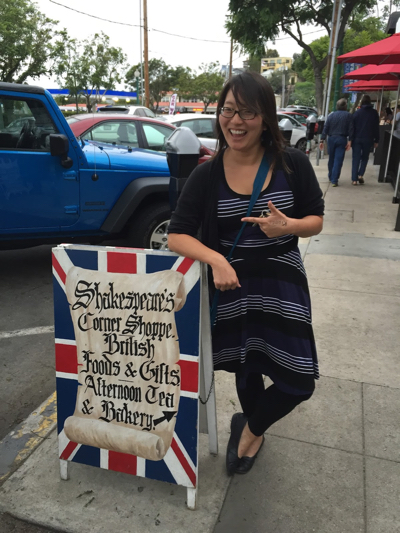 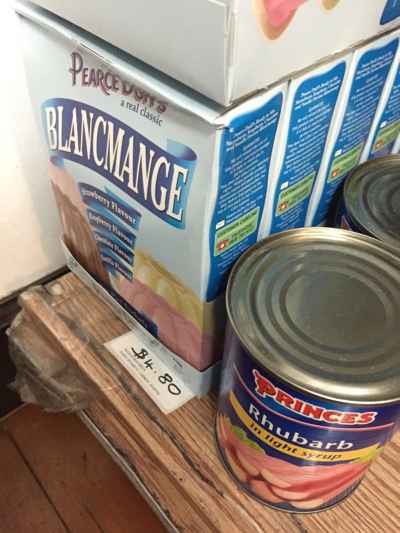 A beaming Professor Flitwick pressed a box of squeaking sugar mice on [Harry] at the end of Charms (Order UK 513, US 582).We’ve been finding out that some food that we thought was made up for the Harry Potter world is actually real. Sugar mice, for instance. It is in fact a traditional British candy. Weird, why on Earth would you want to eat candy shaped like mice? But then, we suppose it’s no weirder than eating bear or worm-shaped things.Anyway, we’d gone only to find kippers, but we ended up buying any number of things:

1. Tinned kippers, bangers, bacon, and a can of Heinz beans for the upcoming Hogwarts breakfast

I had just Googled “sausage rolls” a few weeks back while re-reading Book 4, and I was definitely curious. Sausage wrapped in puff pastry — sounded fantastic! Imagine my excitement when I saw it on the menu at this little shoppe. So we got two, one for Jenne and one for me. And oh man, they did not disappoint. They were much larger than we expected — I thought they’d be the same size as pigs in a blanket, but these were whole bangers they’d used in these rolls.

A moment later the puddings appeared. Blocks of ice cream in every flavor you could think of, apple pies, treacle tarts, chocolate éclairs and jam doughnuts, trifle, strawberries, jelly, rice pudding …. As Harry helped himself to a treacle tart, the talk turned to their families. (Philosopher’s UK 93, US 125)

It’s mentioned again and again that treacle tart is Harry’s favorite dessert, so we’re making it for our HP Birthday Feast on the 25th. We noticed that it was listed on Shakespeare’s menu, and we thought it’d be a good idea to try one and have some idea of what it tastes like.

Conclusions: treacle tart is delicious! The crust on this one was a bit lacking; it didn’t taste like real butter, but we can improve on that for our version.

Dumbledore’s favorite Muggle sweet. Sherbet lemons are a great deal like an American lemon drop, but without the charming lemon shape. They do have a powder in the middle that’s super-tasty though. I’ve also found them a very effective balm for sore throat.

[Harry] had never had any money for sweets with the Dursleys and now that he had pockets rattling with gold and silver he was ready to buy as many Mars Bars as he could carry (Philosopher’s UK 76, US 101).

Harry’s favorite Muggle chocolate bar. We’ve found that Mars bars are basically Milky Ways, except the chocolate is a bit Cadbury-like (which is not our favorite).

We hear that PG Tips is the #1 tea in Britain. Since tea is terribly important in HP, we must get the best.