Flaming Christmas puddings followed the turkey. Percy nearly broke his teeth on a silver Sickle embedded in his slice. (Book 1: UK 150, US 203)
Neither Jenne nor I could wrap our brains around the idea of a traditional British Christmas pudding. From what we understood, this was a dessert that (1) sounded a whole lot like fruit cake, which is almost always gross, but which (2) had a mysterious meat product (suet) in it, and (3) was stored away for a year at room temp before eating. Whaaaaa…? How could the end product possibly be edible?
I don’t think we’d have bothered if we hadn’t been talking to our Official British Friend (OBF), Cam, about English cuisine in general, and she insisted that Christmas pudding is one of the most delectable dishes one can try. Okay, fine, we at 36 Eggs can’t hear a declaration such as this without testing it for ourselves!

Fortunately for us, Cam was v. excited at the idea of making a Christmas pudding and offered her expertise and assistance in the process, not to mention her gorgeous kitchen to cook in. Her partner Hildie cooked us a fantabulous feast of pork medallions in the hours the pudding was steaming, no less.

Adapted from Nigella Lawson’s Ultimate Christmas Pudding recipe
*Sidenote: Cam went to secondary school with Nigella Lawson, who was two years her senior and a faraway, famous sort of figure. Even then, Cam says, Nigella was incredibly glamorous and clearly destined for great things.

1. Put the currants, sultanas, and prunes into a bowl with the sherry. Swill the bowl, cover with plastic wrap, and leave overnight, up to a week. (Holy hell, guys, this stuff is incredible once the booze is all soaked in. It was hard not to grab a spoon and just sail in.)

2. Put a large pan of water on to boil. Butter your pudding basin, including the lid.

3. In a large mixing bowl, combine all the remaining pudding ingredients however you like.
Don’t forget to double-check — we first forgot the spices, and then we had everything all wrapped up and steaming before we realized we’d forgotten the eggs!

4. Add the boozed-up fruit, making sure to get every last drop of sherry with a rubber spatula. Mix thoroughly. According to Cam, it’s tradition for every family member to take a turn mixing and make a wish, so we tried it.

5. Scrape and press the mixture into the mixing bowl. Add the coins, if using.
Squish it down, cover with greased plastic wrap, and put on the lid. Make sure the container is watertight.

6. Cam tied twine around the rim to make these handles. Not only did they look adorable — they were crucial for lifting out the puddings from the pots later.

7. Put the basin in the pan of boiling water (to come up halfway up the basin) or in the top of a lidded steamer.

8. Steam for FOUR HOURS. Check now and then to make sure the water hasn’t all boiled off. 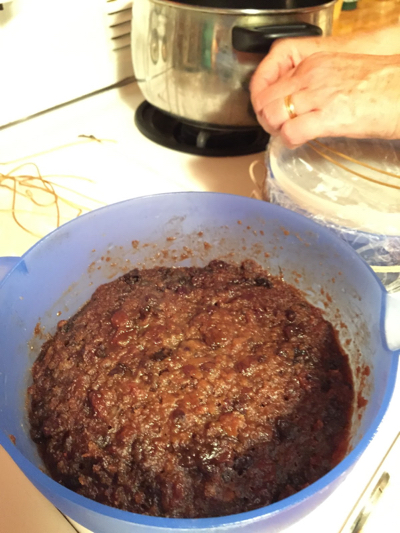 9. Take it out carefully. When it’s cooled enough, put the pudding in the basin in the fridge until Christmas. (It’s much warmer in San Diego than in England, so leaving it out in our room didn’t seem like the best plan.)

Did it measure up?
We’ll find out! The plan is to wait till December, steam it for an ADDITIONAL FOUR HOURS, top it with a sprig of holly, flambé it, and then eat it with brandy butter, along with a number of other HP Christmas dishes, of course.

The batter looked nothing like I expected — it’s a lot chunkier, and I was picturing it to be soft and smooth, like for a sweet tamal (the only other steamed dessert I can think of that has meat fat in it).

Jenne and I had all kinds of doubts about a cake-like dessert not rotting after several months, but we were reassured by articles that talk about how Christmas puddings and fruit cakes can last forever.

The pudding was steamed, lit afire, and eaten at our Very Harry Christmas Dinner. 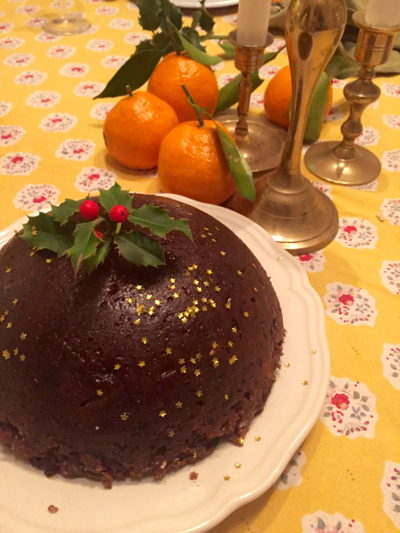