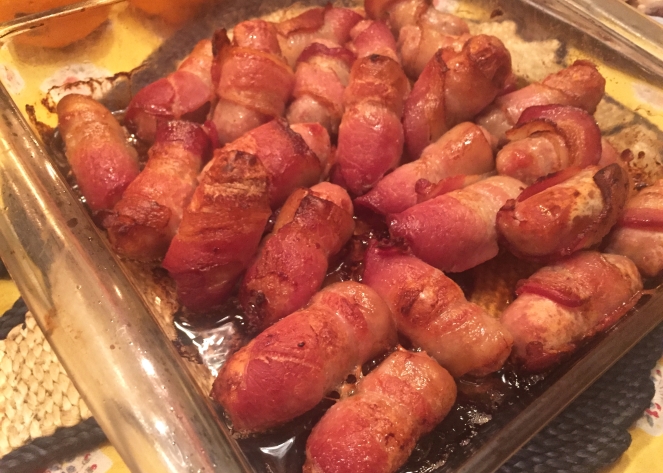 We were overjoyed to find out through a quick Google search that chipolatas are often served at Christmas dinner WRAPPED IN BACON, and this is the British version of “pigs in a blanket.” HOW AWESOME IS THAT.

Still not entirely certain what makes a chipolata a chipolata, except that it seems to be typically on the shorter side in length. Is a chipolata a banger? Further research is required.

Did it measure up?
Well, just about anything wrapped in bacon is worth eating, right? And these sausages are plenty delicious enough as they are; we don’t know what they put (crack, perhaps?) in this particular brand that we get from the touristy British store. Put the sausage and bacon together…and the result is almost too delicious to stand.

Miko: The recipe we looked at told us to prepare for 2 per guest. Well, they were sitting in front of me at the table, and I probably had 6. Maybe more.Jenne: Yeah, these were indecently delicious.