Welcome to Tidbits of History, where we talk about food facts I found weird or interesting while researching 19th-century recipes. Part 1: Victorian thickeners!

Tbh, I never gave much thought to thickening agents until I tried to recreate Meg’s blanc-mange, one of the quintessential Little Women recipes, and it was SO DAMN DIFFICULT. When we got the cookbook gig, I thought I’d revisit the arrowroot recipe from Abba Alcott (Louisa May Alcott’s mom and the real-life Marmee) … and it once again turned out like milk-flavored Gak. 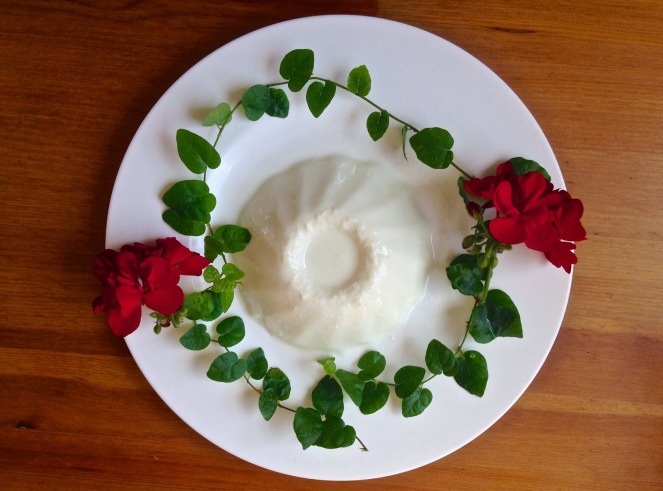 There are a gajillion blanc-mange recipes from the 1800s, and here are the most common thickeners I saw in them:

Arrowroot: A starch made of tropical plants. It can prevent ice crystals from forming when added to ice cream. Gluten-free, grain-free, vegan- and paleo-friendly … and an absolutely TERRIBLE thickener for making blancmange, unless I was doing something very wrong.

Calf’s feet: One of the blanc-mange recipes from The Young Housekeeper’s Friend (the only cookbook specifically mentioned in Little Women) straight-up starts off, “Put four calf’s feet into four quarts of water; boil it away to one quart, and set aside.” … We didn’t pick that method to use in our recipe, for some reason. Before you say, “Ewww,” though, I’d like to point out that the current gelatin production process is way grosser.

Cornstarch: You probably know what cornstarch is.

Gelatine: Dried collagen derived from animal skin and bones. On a sidenote, it’s so difficult to avoid gelatin if you’re trying to avoid animal products! (It’s in marshmallows! And Frosted Pop Tarts!) Judging from the wording in Young Housekeeper’s Friend, they were using leaf gelatin, not powdered.

Irish moss: When I saw “Irish moss,” I expected it to grow in the green, green woods of Killarney. But no, it’s a red algae that proliferates in the North Atlantic, on both the European and North American coasts. Carrageenan, an extract of Irish moss, is still added today to meat and dairy products like ice cream, yogurt, and lunch meat. Apparently, it’s a common clarifying agent in home brewing today. Irish moss is similar to agar-agar, which is also made from red algae and used widely in Asian cooking — I grew up eating a ton in Japanese kanten desserts.

Isinglass: “Isinglass” is a lovely word, isn’t it? Sounds like something the Lord of the Rings elves would use to make perfume bottles. But, sorry to disappoint you, isinglass is made from the dried bladders of fish. For the March family, they probably would’ve been cod. Isinglass is used now for clarifying beer too.

And there you have it: a preeetty unappetizing selection of 19th-century gelling agents!