“I can smell something good!” cried Benny. “Is it cherries?”     Then Mary went into the house and came out again with big bowls of cherry dumplings.
“Yes, my little dear,” said Mary. “Cherry dumplings. The cherries are cooked in the dumplings.”
Benny ate his cherry dumpling and went to sleep with the dog for a pillow. (Warner 84)

Miko’s review: My second grade teacher read The Boxcar Children to our class, and it was one of my favorite school read-alouds ever. I do love an orphan story, and the Aldens’ housekeeping details were fascinating: how they keep milk cold in the brook, how they use thinned vegetables to make a stew, how they build a pool, etc. I recommended the book to Jenne and re-read it myself for blog research. There are a bajillion and a half meals in the story that we could recreate (because the Aldens are always eating — clearly, they are our people), but we decided to start with Mary’s cherry dumplings.

There are endless ways to make cherry dumplings: boiled, steamed, baked, fried… We started off with two varieties, one baked and one steamed, but we will be sure to attempt more recipes when cherry season hits again.

We were determined to use fresh cherries for this project, which meant a whole lot of pitting. Well, I was wandering around Target one day, checking every single aisle for stuff to waste my money on (as one always does at Target), when I found a cherry pitter! I had to buy it, obviously.

It’s like the world’s best hole-punch. It is just incredible how far technology has brought humankind. Best 11 bucks I’ve ever spent.

1. Chop the butter into the flour. 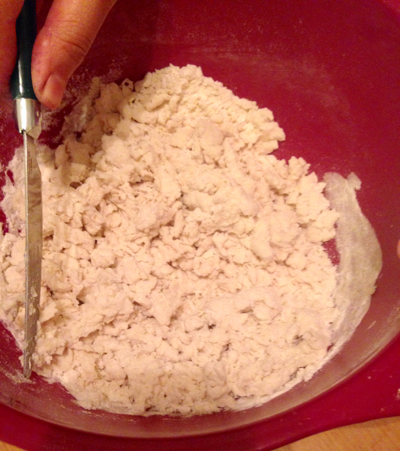 4. Roll into a sheet and cut into squares about 4 inches across.

5. In the center of each square, put a big spoonful of the stoned and sugared cherries.

6. Lay the dumplings, pinched sides down, on a floured baking pan.

7. Brush the tops of the dumplings with egg wash. 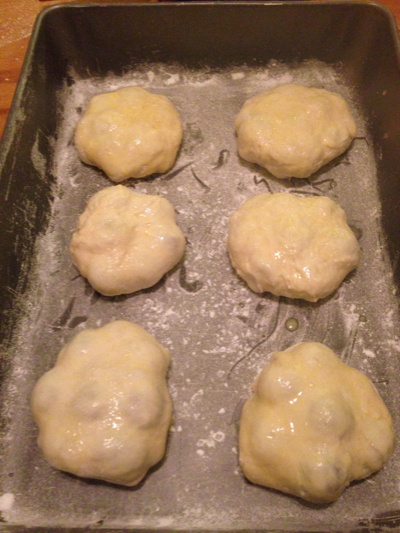 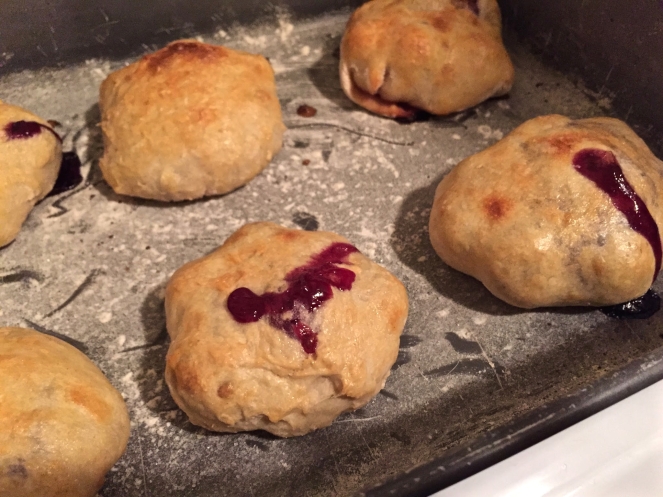 Marian Harland, your “carefully proved” recipe is a piece of poo. The crust was like thin shoe leather: tough, dry, chewy, and flavorless. Blaaaargh. Standard pie crust would be much tastier. Regular cherries were also just a touch too sweet; sour cherries would be much better, but sadly, they are hard to find in San Diego. We hear whispers that fresh sour cherries can sometimes be found — for exorbitant prices — in Middle Eastern markets. We must investigate when they are next in season. Jenne and my girlfriend Laura both thought the dumplings were edible, which bumped the deliciousness rating up to “Acceptable.” (But if it was just me, I’d have marked it “Poor.”)

1. Make cherry sauce. Put cherries, lemon juice, and water into a pot. Put over medium until the cherries are cooked down.

4. Add buttermilk mixture to dry ingredients and stir with rubber spatula until just incorporated and batter pulls away from sides of bowl.

5. Drop about 3 tbs of dumpling batter at a time into the pot of cherry sauce. 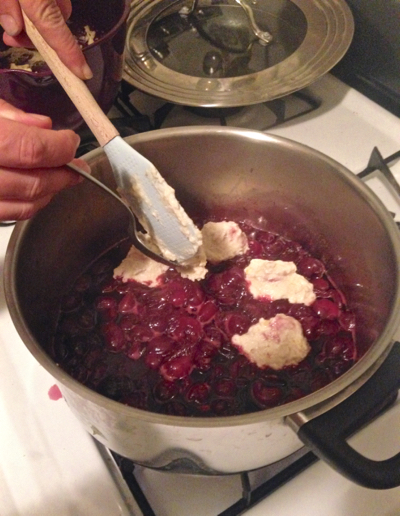 6. Cover the lid with a clean kitchen towel and put the lid on the pot. 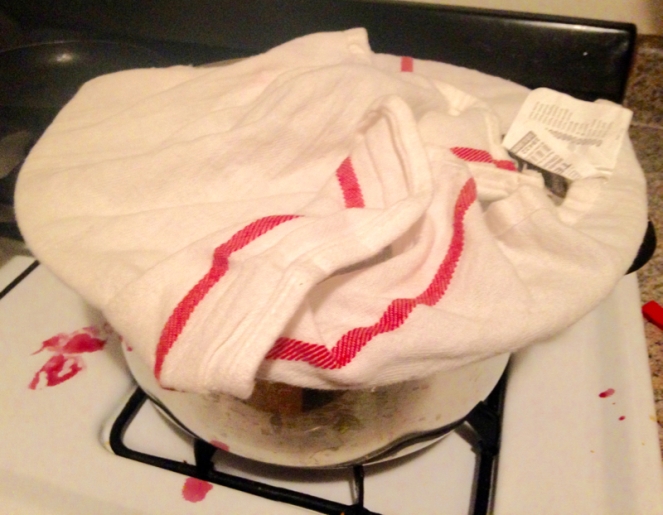 7. Cook over medium-low heat (it should bubble a little but not be at a roiling boil) for 15-20 minutes.

Ehhh. It was strangely bland. Again, it would make a big difference to have tart cherries. Further experimentation with recipes required!

Also, the leftovers looked simply terrible the next morning. We realized eventually that the grey spots were from the cherry juice soaking in, but we sure thought it had molded overnight.

A bunch of cherry dumpling recipes we researched told us to eat them with “hard sauce.” We’d no clue what hard sauce was, but a quick Google search made it obvious that we HAD to try it, authenticity to the Boxcar Children books be damned. 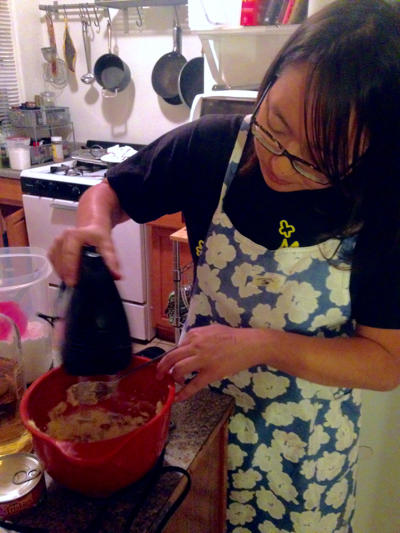 1. Beat butter with a hand mixer till fluffy.

2. Add powdered sugar gradually. Add liquor and beat again. Make sure to scrape the sides of the bowl periodically so everything gets incorporated evenly.

3. You can keep it covered in the fridge for days, maybe weeks. Eat with warm desserts like pies, cobblers, and dumplings. Or straight out of the bowl with a spoon. We won’t judge.

Did it measure up?
New favorite thing!