The walk revived [Jo’s] spirits, and flattering herself that she had made good bargains, she trudged home again, after buying a very young lobster, some very old asparagus, and two boxes of acid strawberries ….

The salad dressing so aggravated her that she could not make it fit to eat. The lobster was a scarlet mystery to her, but she hammered and poked till it was unshelled and its meager proportions concealed in a grove of lettuce leaves.

At first, I was puzzled that a poor family like the Marches would serve lobster, even for a fancy meal. (More than once too! Lobster is featured in this scene and again in Amy’s disastrous lunch in a later chapter.) Then I Googled “lobster culinary history” — turns out that lobster was considered “a mark of poverty” back in the day. Imagine that. They used to feed it to British POWs during the Revolutionary War. Lobster started getting popular in the mid-1800s, so maybe by the time Little Women took place, it was a bit of a treat, but not quite the $18.95/lb treasure that it is now. Jo getting lobster must be the Victorian equivalent of me springing for a Costco salmon fillet when I have friends coming to dinner. (Btw, the lifespan of an American lobster is 60+ years! What.)
Did it measure up?
You know, this is kind of a controversial thing to say (although I feel slightly justified now that I know that lobster was considered garbage way back when), but I don’t really like lobster that much, tbh. The lobster salad was one of my least favorite parts of the meal. However, the salad dressing was kind of great, like an exciting (and much easier) spin on hollandaise. I was nervous beforehand about that salad dressing and whether it would be edible, but we ended up dribbling it over everything — not just the lobster salad, but the potatoes and asparagus too.
JO’S LOBSTER SALAD
Ingredients:

1. Unshell the lobster. I just cracked and cut with the kitchen scissors. It was as much a mystery to me as it was to Jo. If I’d had access to the internet, I’d have watched this helpful 1-minute Martha Stewart video. 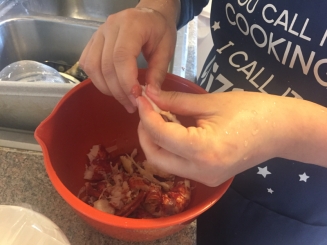 2. Tear the lobster meat into small pieces with your fingers.

5. Lay out a “grove of lettuce leaves” on a plate and put the lobster meat in the middle.

JO’S LOBSTER SALAD DRESSING
Adapted from The Young Housekeeper’s Friend by Mrs. Cornelius
The Young Housekeeper’s Friend, the only resource I was allowed to consult for recipes and directions during this cooking challenge, gives the following recipe for lobster salad dressing: “To the yolks of four eggs, boiled hard, add a little sweet oil, mustard, pepper, salt, and a gill of vinegar. Stir these all together a long time.” And that is it. No further instructions. She doesn’t even give the amount of each ingredient. Like most olden cookbooks, she assumes that you have decent training in cookery already and can figure out the rest yourself! No wonder Jo was in trouble. These cookbooks make me extremely grateful for all the step-by-step, photo-illustrated recipes that are available on the internet.

1. Boil the eggs. I always use the Joy of Cooking method to boil eggs — you start the eggs in cold water, and you turn the heat off as soon as the water comes to a full boil. Then you let the eggs sit in the hot water to cook fully, 15 minutes to get to hard-boiled. But I think I was a little impatient and took the eggs out of the pot too early. The yolks were still kind of soft. Oops.

2. Cut out the yolks and put them in a bowl. 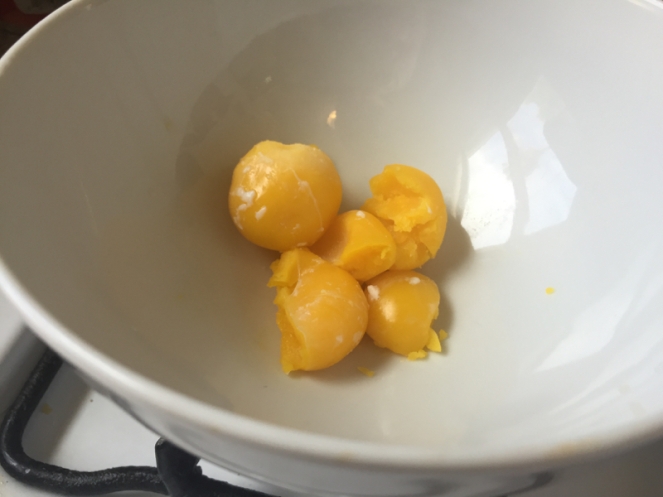 3. I then put the olive oil, vinegar, mustard, black pepper, salt, and lemon juice on the counter and kept adding a teeny bit of each, mixing, and then trying a bit till it tasted right. 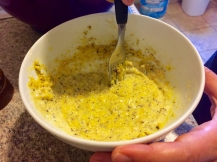 No idea what ingredient ratio I ended up with, but it looked like this: