The cheerful super table, with the twins’ bright faces, and Marilla’s matchless plum puffs … of which Davy ate four … did “hearten her up” considerably after all. (Montgomery 99)

If these plum puffs were described as “matchless” and cheered Anne after her “Jonah Day,” then they should, well, taste good. But LMM’s plum jam recipe didn’t turn out great (both times), and the authentic recipe for plum puffs that we tried was absolute garbage. So we set forth to create the plum puffs of our imaginings!

We had both pictured something like a cream puff, but with plum jam inside. We decided that for added deliciousness, we would add custard too.

When I copied the recipe for my mother’s famous custard, I mistakenly wrote “1 tbs vanilla” instead of “1 tsp,” so it was a bit too vanilla-ey, and it turned the custard into an unbeautiful brownish color instead of the classic pale gold. But it still tasted good.

We made the puffs bite-size, but I’d like to try them big — like Japanese choux cream, which are the size of a child’s fist.

MARILLA’S (NOT SO) MATCHLESS PLUM PUFFS

Make the Cream Filling:
Based on my mother’s cream pan custard recipe

1. Heat the milk over high heat until it’s just about to boil. It should have a thin film on top.

2. Put the egg yolks in a bowl and mix a little. Add sugar and beat until it turns paler in color. Sift the flour and corn starch as you beat them in, so the mixture doesn’t get all gluey.

3. Add a little of the hot milk, and then beat thoroughly with a whisk. Add the rest of the milk and mix well again.

4. Strain the mixture into a pot and put on medium heat. Mix with a wooden spatula until it’s thicker in consistency. Once it’s thick enough, beat with an electric mixer until it’s nice and creamy.

5. Heat again until it bubbles.

6. Add butter and vanilla, and then mix. Put plastic wrap right on the surface of the custard, and then let it cool.

7. Whip cream till you get stiff peaks and mix it in (a half and half custard to whipped cream ratio).

Make the Choux:
Adapted from recipes from Cooks Illustrated & Richard Bertinet’s Pastry: A Master Class for Everyone, in 150 Photos and 50 Recipes

1. Beat the eggs and egg white in a small bowl. You should have a ½ cup. (Discard any extra.) Set aside for later.

2. Bring the butter, milk, water, sugar, and salt to a boil in a small saucepan over medium heat, stirring once or twice. When it reaches a full boil, remove the saucepan from the heat and stir in the flour with a wooden spoon/heatproof spatula. The mixture should clear the sides of the saucepan.

3. Return the saucepan to low heat. Stir constantly, using a smearing motion, until the mixture is a little shiny and looks like wet sand. Little beads of fat should appear on the bottom of the saucepan. (This should take about 3 minutes. If you use an instant-read thermometer, the dough should be 175-180 degrees.)

4. Transfer the mixture to the stand mixer. Beat with the paddle attachment for 1 minute.

5. Add the eggs, 1/3 at a time, while keeping mixer going. You might not need all the egg (we did!) — the mixture should be smooth and glossy, but firm enough to hold shape for piping.

6. Adjust the oven rack to the middle of the oven and heat to 425 degrees.

7. Spray a baking sheet with non-stick cooking spray and line with parchment paper.

8. Fit a pastry bag with a 1/2-inch plain tip (ours was narrower, so we should had to squeeze out more with each choux.) Fold down the top 3-4 inches. Fill the bag with the dough. Unfold the bag, lay it down, and push the dough toward the tip. [I’ve also used a Ziploc bag for this and it worked fine or actually better -Jenne]

9. Twist the top of the bag and pipe the paste into 1.25- to 1.5-inch mounds onto the baking sheet, with 1 inch in between. You can use fingertip dipped in cold water to even out the shape. 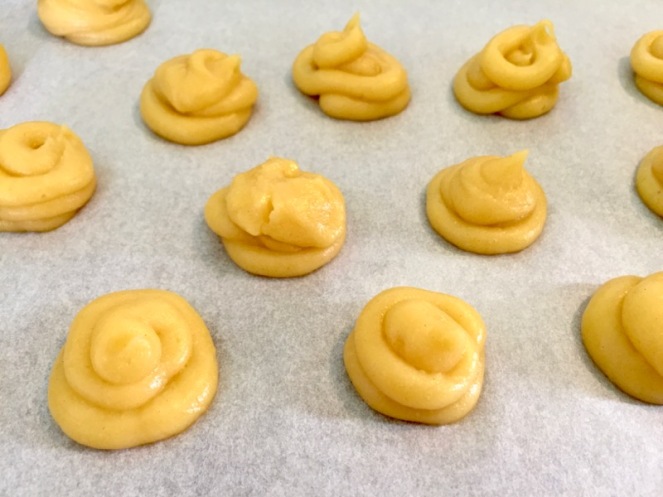 10. DON’T OPEN THE OVEN DOOR WHILE BAKING. Bake for 15 minutes. Then reduce the oven temperature to 375 degrees. Continue to bake, 8-10 minutes more, till the choux are golden brown and firm.

11. Take the sheet out of the oven. Cut a 3/4-inch slit into the side of each puff and put the puffs back in the oven, propping the oven door open with the handle of a wooden spoon. Turn the oven off and dry the puffs out until the centers are just moist, and the outside is crisp — this should take about 45 minutes. 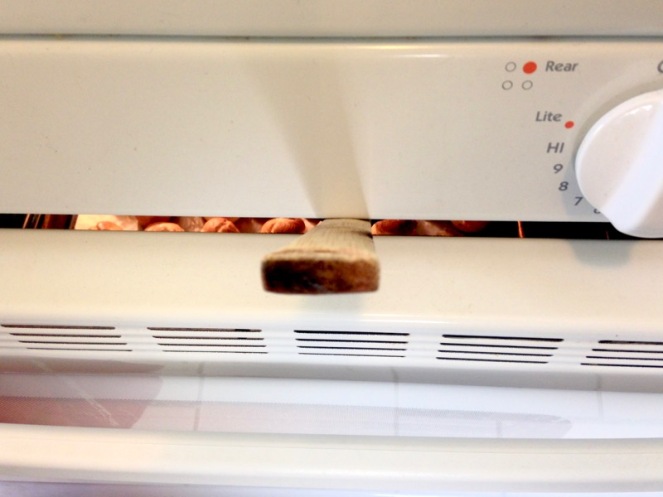 12. Transfer the puffs to a wire rack to cool.

1. Fit two pastry bags with 1/4-inch tips. Fill one with the cream. Fill the other with plum jam. 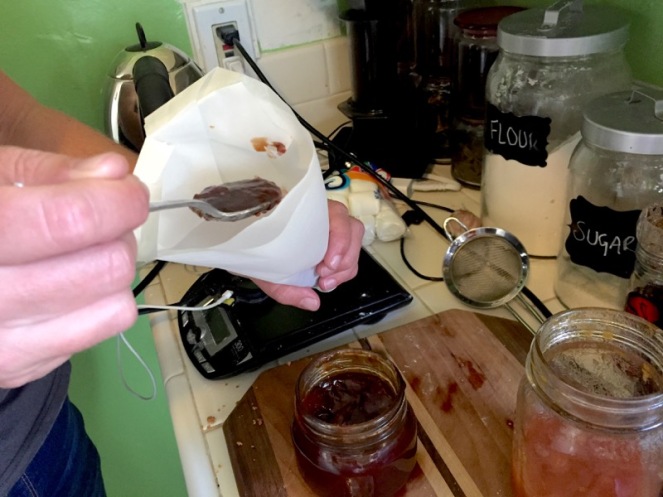 2. Pipe a little jam (not too much!), and then some pastry cream through the slit in the side of each puff. (Fill each puff until the pastry cream starts to ooze out the side.)

3. Serve with a cup of tea. (We used our rosebud spray tea set in honor of the occasion.) 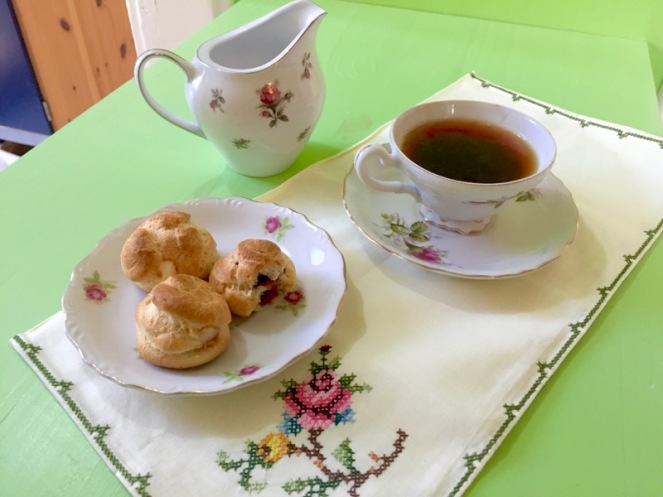